Success Stories: Filip Rebraca – From Post-Grad To Playing in The Big Ten

Filip Rebraca is the son of former NBA player Zeljko Rebraca.  Filip grew up in Sombor, Serbia before coming to the US for his senior year of high school.  Filip had a unique high school career, as it took place in two countries over the course of six years.  Why six years?  He missed one in its entirety due to him having mono.  When he finally came to the US as a high school senior he arrived in a suburb of Denver, Colorado to live with a family friend.  Filip only played a few games at this high school due to eligibility concerns with the Colorado state high school association.  Knowing that he had an incomplete final year of high school, his guardian reached out to me to find him the right fitting prep school for a post-grad year. 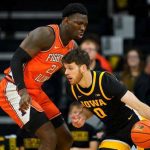 Filip is 6’9’’ and had the toughness of most Serbian players.  We started looking at options in late Spring and after talking to a few schools, he settled on Williston Northampton.  Coached by former D1 player/coach, Ben Farmer, Filip took his game to the next level.  He earned the team MVP award as well as Class A All-NEPSAC accolades.  Filip’s NCAA eligibility was in jeopardy due to his unique high school trajectory and illness.  Coach Farmer used his experience and knowledge with NCAA eligibility to ensure Filip would be in good standing.  They also worked with Holly Smith Abbott who is the former Assistant Director of International Academic Certification, in the Eligibility Center at the NCAA National Office.  Her consulting company, International Credential and Sports Advising LLC ensured his academic records were correct.  Once this was resolved after the season, he signed to play for the University of North Dakota.  To become eligible to play right away, Holly wrote an appeal to the NCAA which was approved.

Upon arrival at UND, Filip immediately made an impact.  He started 16 games and even scored in double digits on the road against then, the top 10 ranked University of Kentucky.  His next year he did even better at UND earning All-Summit League Honorable Mention.  His third year he improved to earn Second-Team All-Summit League Honors.   After his third year, Covid was in full effect and Filip already had graduated with a degree in economics.  He talked with his head coach and put his name in the transfer portal.  After visiting a few top tier schools Filip chose to attend the University of Iowa.

During Filip’s first year at Iowa, he started all 36 games and was the co-winner of the team’s Newcomer of the Year award.  Going from UND to a team that was ranked in the Top 25 was an adjustment for Filip but he handled his role. His last season playing NCAA basketball will be the 2022-23 year.  Filip didn’t have any offers coming out of his minimal season of public high school basketball except to a few smaller level colleges.  Without a post-grad year Filip would not have achieved, as easily his dream of playing D1.