In this feature we are going to highlight prep school success stories. The first article in this series focuses on 6’9’ Nevin Zink from Newtown, Connecticut.  Nevin played AAU for DTX, which was founded by my college coach at Air Force, Dave Taylor. In August 2016, I talked to Coach Rich Gatewood who moved from Kentucky to South Carolina to coach at 22 Feet Academy.  At the time none of us were aware of the term ‘basketball academy’ and we quickly found out what that meant. Nevin was offered a good deal on tuition from the academy’s owner and within a few days was in South Carolina. Immediately, the situation didn’t feel right to Nevin or Coach Gatewood.  There were bedrooms where four kids or more were living, with some having to sleep on the floor. The food was also subpar. Coach Gatewood moved his young family down there and the owner didn’t provide some of the benefits that were promised. It was looking like an absolute con. The roster however was chock full of D1 talent and the team bonded due to all of the adversity they were facing off the court. On a daily basis Nevin was practicing against a big man who ended up at the University of Cincinnati. He also went up against Deandre Ayton multiple times during the season. Nevin improved his game immensely and dealt with this situation not being ideal. 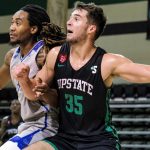 As the year progressed Nevin and his family agreed that we would need to move him to a brick and mortar prep school for a post-grad year.  After discussions with a few schools that were good fits, he decided to play for Coach Mike Hart at The St Andrews School in Rhode Island.  This is a NEPSAC AA school that has sent kids to play college at every level, and won multiple league titles.  Former NBA Rookie of the Year Michael Carter-Williams went here and Richard Pitino had his first coaching job out of college under Coach Hart. This was a real school, with real teachers, dorms, facilities, accreditation’s, etc. Nevin appreciated these aspects and played at a high level all season.  In the spring Nevin was holding out for a D1 offer, and one came from Coach Dave Dickerson of USC Upstate. Nevin accepted this offer and ended up starting his first game as a freshman.  During his time at USC Upstate, Nevin was a constant on the court.  Off the court he was excelling in the classroom winning awards such as the 2021 DI-AAA ADA Scholar-Athlete of the Year and the 2021 Big South Scholar-Athlete of the Year.

Nevin was a hard working big who knew he had the potential to play at the D1 level. He knew staying at his hometown public school would not get him to this level. He took a chance on himself and played two years in the prep school circuit. With patience and an established coach working on his behalf, he ended up realizing his dream of playing D1. In the spring of 2021, Nevin put his name in the transfer portal, and transferred to Boston University.  All of this was possible with hard work, good grades, and doing a prep school year.