Success Stories: Quinten Elrod – From Not Playing As A Senior to Getting A Full Ride

In the summer of 2021, I received a call from Jeff Mohlman, an AAU coach in Dayton Ohio.  Jeff had a player named Quinten Elrod.  Although Quinten was 6’8”, he hadn’t played many minutes on his high school team.  This was puzzling because few public high school teams have players of this size.  He mentioned that Quinten was raw and needed an extra year to develop on the court, in the weight room, as well as the classroom.  I talked to Quinten and his family, and they were excited to learn more about potential post-grad options.

In addition to Quinten’s lack of playing time, he hadn’t lived up to his potential academically.  The first prep school we found loved him but wouldn’t offer him an acceptance letter because his grades weren’t high enough for their academic requirements. 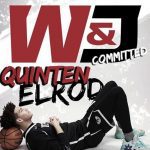 Quinten also had a phone interview with the Kiski School.  The admission team loved Quinten’s personality from the start and were willing to talk with him despite his mediocre transcript. Quinten and his family visited Kiski and fell in love with it. His in-person interview with the director of admissions gave him a chance to ask pointed questions about his academic options.  Shortly after this visit he received an acceptance letter and within days enrolled for a post-grad year.

The summer before his post-grad year at Kiski, Quinten played AAU and trained with another local player who would also be going to Kiski.  When he arrived to Kiski’s campus in August he went through a transition that most kids do who leave home for the first time. He struggled at first but quickly settled in.  During the open gym runs he had good exposure to college coaches.  Academically, his final GPA rose to 90.7.  He lost some playing time due to injuries, but Washington and Jefferson College, a D3 liberal arts school in Pennsylvania, signed him and offered him a full aid package.  Quinten is a good kid with a lot of talent who, previous to his post-grad year, had not been given the chance to develop athletically or academically to his full potential.  This year will forever change his life’s trajectory.